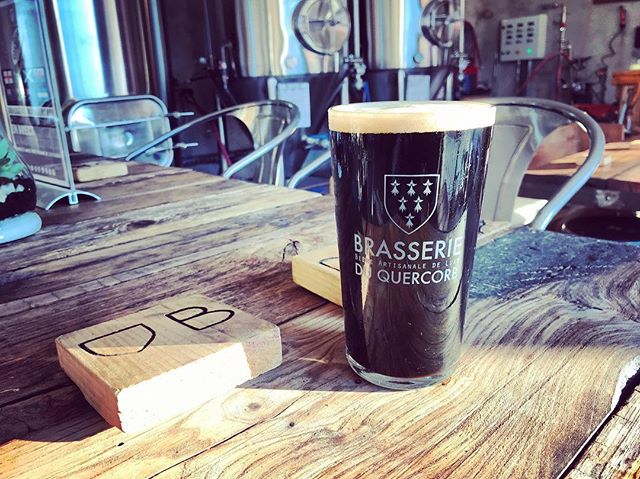 Chez Black Mountain, nous sommes avant tout des amoureux du goût, du terroir et des expériences ! Nous avons ainsi récemment collaboré avec la Brasserie artisinale du Quercorb pour une référence finie en fût de whisky Black Mountain : une délicieuse Imperial Stout que nous vous encourageons vivement à tester…
Vous ne le savez peut-être pas, mais la bière et le whisky sont 2 mondes intimement liés : leurs ingrédients de base sont les mêmes (levure, eau, malt), et les deux boissons partagent également quelques étapes similaires lors de leur fabrication (brassage et fermentation) – le whisky est en réalité une bière distillée et vieillie en fûts (sans ajout de houblon ) !
Nous avons ainsi souhaité laisser la parole aux fondateurs de la Brasserie du Quercorb afin que ceux-ci vous présentent leur travail ! [En Anglais dans le texte]
– First of all, could you please tell me a bit more about yourself: where do you come from, career background… And how did you end up creating a craft brewery in South-western France? What’s your personal relationship with beer: first sipped, any noticeable milestone in your hoppy journey? A brewery that really inspires you?   – We are English – my wife from the North & me from the South. Jayne’s Grandfather was a Brewer, my Uncle was a serious Homebrewer. Beer is very much part of our heritage. It was drunk with a meal, it was respected and discussed as wine is. We live in a very beautiful area, vast amounts of fresh air, great food and wine, but 15 years ago we couldn’t find the diverse range of beers we wanted to drink here. It was obvious that we’d be Brewing if we were going to live here. The project began 8 years ago, initially tiny. Our neighbours liked what we made, we found clients and we expanded. I’m looking for clean, crisp, flavours. In the UK Dark Star were original and inspiring, we also really admire Tiny Rebel in Wales, Garage Brewing and Espiga in Barcelona, Brasserie l’Être and Brasserie Craig Allen in France. We both have backgrounds in design and television, that experience of attention to tiny detail is very much a part of what we do. How the bottle looks is as important as what’s inside.   – What about whisky? You’ve recently done a collaboration with Black Mountain Whisky Compagnie, creating a whisky-finished beer: could you tell us the story behind this beer? Do you think whisky and beer have a lot in common? Can you pair whisky & beer? What would be your favourite whisky & beer combination? With our beer I wanted to preserve the traditions of creating incredibly diverse flavours from simple ingredients. We’re passionate about flavours, textures, presentation. Whisky encompasses all of those things – again, you’re creating a wonderful product from very humble ingredients. One of Jayne’s favourite beers is an Imperial Russian Stout from Harvey’s Brewery in Lewes, South England. It is rich, unctuous and warming. Some years back at the Barcelona Beer Festival we discovered an Imperial Stout that had been aged in Whisky and we were amazed. We wanted to create a French version that would bring the slightly smoky sweetness that I associate with Whisky to the rich, spicy notes of our Imperial Stout. The advantage of being small is we know our clients and suppliers. We don’t want to work with anonymous producers, we want to know the story behind the product and the passion that goes into it.   Cedric is the personality behind Black Mountain Whisky and his enthusiasm is infectious. We approached him and explained our project. We were delighted to be working with him on this. The first batch was aged for 9 months. The result is as we hoped and we’ve discovered it is a perfect match for a smooth milk chocolate mousse.   – We’re seeing more and more craft/micro breweries popping up each and every month in France, do you see this as a threat or an opportunity? It’s fantastic! The French Beer scene is rediscovering it’s heritage for great beer and there’s diversity again. The market for beer will continue to grow as long as the quality remains high. There is plenty of room for good beer.   – How would you define « craft »? Craft is something you work at and constantly improve and refine. Any fool can make beer, the trick is to make consistently good beer – that takes skill and experience, that is craft.   – How do you see the future for La Brasserie du Quercorb? Any exciting project in the pipeline or crazy dream you’d like to achieve? Our barrel aging program is underway, we’ve teamed up with some of the best independent wine producers in the region, and we’re really excited about the results of that. 2018 is a big year for us – we’ll keep you posted!
Partager
< Précédent
Suivant >